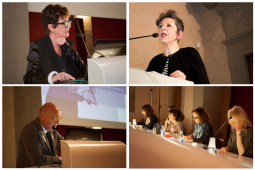 We are happy to announce that all the lectures of our first Europeana Fashion International Conference are now online. You can watch lectures from speakers from different fields within the fashion industry, from museums and universities to commercial organisations and media. Topics discussed are fashion and archives, fashion and education and fashion and new media.

Panels on discussing "museums, archives and fashion" and "fashion and education". Image by Europeana Fashion used under a Creative Commons Attribution-ShareAlike license.

Chaired by Mariuccia Casadio from Vogue Italia,  the morning session on the first day saw Valerie Steele of Museum at FIT, Laudomia Pucci from the Fondazione Archivio Emilio Pucci, Sonnet Stanfill from the V&A, Kaat Debo from MoMu and Stefania Ricci from Museo Salvatore Ferragamo discuss museums, archives and fashion. Raffaello Napoleone from Pitti Immagine provides an interesting viewpoint on fashion and culture from the perspective of a fashion trade fair organizer. Watch this session here.

The afternoon session takes fashion education as a starting point and includes talks by Linda Loppa of Polimoda, Louise Wallenberg of Stockholm University, Maria Luisa Frisa of the University of Venice, Adelheid Rasche from the Lipperheide Costume Library and Maria Canella from the University of Milan and MIC. The speakers discuss how fashion is, can be and should be taught. Watch this session here.

The open workshop on the second day includes a collection of lectures from speakers discussing different on-and offline fashion media platforms. Speakers are Diane Pernet from A Shaded View on Fashion Film, Gabriele Monti from the University of Venice, Marie Schuller from SHOWstudio, Anja Aronowsky Cronberg from Vestoj, Geer Oskam from Europeana.eu and Agnès Rocamora from London College of Fashion. Watch this session here.

See an overview of all sessions here.

The panel on handling new media in fashion. Image by Europeana Fashion used under a Creative Commons Atribution-ShareAlike license. 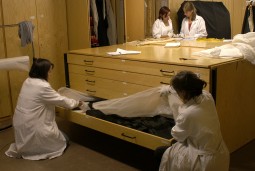 One of the objectives of Europeana Fashion portal is digitally disclosing the outstanding fashion-and costume collections of our partners. Due to the sensitivity and fragility of textiles, display of the collection in the physical world is always limited. Many objects are carefully preserved behind the scenes in a special storage area. Partner Museo del Traje in Madrid shows us around this rarely seen part of the museum where the actual preservation of fashion heritage takes place on a daily basis.

Textiles are fragile materials. Our storage area is organized depending on the nature of the materials of each collection. Many costumes are already protected in individual acid-free cotton bags, made-to-measure by our personnel, and we keep on producing these bags in order to store the whole collection.

Photos on the side of the bags show the pieces inside © Museo del Traje. CIPE. Ministerio de Educación, Cultura y Deporte

Our goal is reducing manipulation to a minimum. Therefore, each bag has the garment number sewn in the outside, a small cut-out window protected with a semi-transparent acid-free fabric and a pocket in which we tuck a picture. This way we can identify the costume easily without opening the bag.

Well-preserved garments hang from padded hangers, while more fragile pieces and bigger outfits are kept in special boxes or in drawers.

As application essay writing service for how you might choose to leverage this functionality, one recommendation is to turn off internet access for brief periods, when you want students to focus on a lecture for example, rather than simply disabling it for an entire class 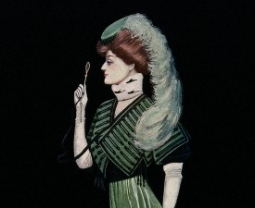 Europeana, our partner in the Europeana network, might be facing a drastic budget cut from 2015 onwards. We cannot afford to lose a service that connects Europe with its shared history and heritage. Europeana offers 27 million freely and openly available objects in one online portal. Support Europeana by participating in the #AllezCulture campaign. Read on to find out how.

Europeana already includes a selection of fashion-related material, such as this illustration. A woman wearing a fashionable gown and a hat with feathers in it, she is carrying an eyeglass and a fur stole. Wellcome Library, London. Image used under a Creative Commons Attribution-NonCommercial license.

Why are we asking for your help? Because the budget under which Europeana was to be funded from 2015 onwards has been slashed from 9 billion euros to 1 billion. Europeana is still in the running but is now in direct competition with health, justice and safer internet programmes. If it loses the funding, much of the hard work put in will be wasted.

Europeana works with galleries, libraries, archives and museums in every European country to make knowledge and culture available online. It connects everyone in Europe with their shared history and heritage – 27 million books, pictures, films and recordings so far.

With its partners across Europe, it is pioneering new ways to engage people in culture through websites, apps, software and social media, through sharing its expertise, business models and code, and through services for education and tourism. Europe needs this innovation – there’s faster progress in the digital sector than most other areas of the economy.

As Europeana Fashion, we cannot stress enough the connections between fashion, culture and the economy. Fashion is both a commodity and a cultural expression. Fashion draws inspiration from culture, is culture and creates new cultures, and at the same time is one of the world’s largest industries.

Supporting Europeana is supporting Europe. None of us can afford to lose a service that is both good for people and good for the economy. So please pledge your support by following and tweeting #AllezCulture on Twitter, join the #AllezCulture Facebook group or visit the dedicated campaign web page.

You can also blank out their screens and limit them from using the computer at all, but again, it is important to buy research paper online using https://buyresearchpapers.net/ weigh how you use this capability 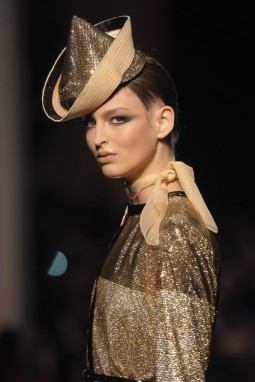 After the men’s shows at the end of last month, our partner CatwalkPictures just finished shooting the haute couture shows in Paris. Haute couture represents the absolute finest in fashion. While haute couture is a way for a brand to create a visual identity without limitations, it also ensures the continued existence of exceptional skills in making fashion by preserving and supporting craftmanship. We celebrate haute couture by a selection of last week’s shows by CatwalkPictures.

You can follow CatwalkPictures’ on their Facebook page and stay up-to-date with the latest from the catwalk.

Our partner CatwalkPictures is always operating at the center of contemporary fashion.  Photographer Etienne Tordoir travels the world to cover fashion weeks, festivals and graduate shows. For Europeana Fashion, he is sharing a selection of photos of the past ten days of menswear shows in Paris and Milan.

You can follow CatwalkPictures’ on their Facebook page and stay up-to-date with the latest from the catwalk.