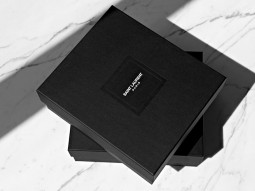 Danilo Venturi -fashion and luxury consultant, author of “Luxury Hackers” and head of department at Polimoda- unleashed a hefty debate on Polimodamag.com around a brand’s use of its heritage, stating that brand Alexander McQueen under PPR has lost the character of its name-sake designer after his unfortunate death. Concurrently, the YSL logo change by Hedi Slimane elicited some vehement opposition on Facebook. Obviously, heritage can be a hot and touchy topic in the online sphere.

Brands go about their heritage in different ways. While some brands reveal some of their heritage to the public and curate the content in an especially designated space (e.g. Cristóbal Balenciaga Museoa, Gucci Museo), the majority of brands keep their heritage in private archives.

However, whether public or private, the identity of a brand’s heritage is always being reconstructed. Even a curator at a museum decides what to put on show (and what not) and a newly-appointed designer to a brand going through the archives of that brand cannot (and should not) literally replicate the brand’s essence, it always has to be reinterpreted.

But with fashion’s increasing presence online, a new factor comes into the equation : the online fashion consumer. Now both the brand Alexander McQueen and the designer Hedi Slimane for YSL are under fire for allegedly losing the essence of the brand, while on the other end of the spectrum Raf Simons is being lauded for his first Dior collection, allegedly succesfully reinterpreting the brand.

Whether positive or negative, the responses testify to the mass involvement of the online fashion consumer. It has transformed a brand’s heritage from a dictated image, towards an identity that is ever in flux, endlessly chopped away at, constantly reconstructed, and finally a discourse in the online sphere.

The ever-rising interest in fashion demonstrated by the increasing number of fashion exhibitions underlines the relevance of Europeana Fashion. Europeana Fashion embraces this growing involvement of the public and even takes it a step further.

Big showcase exhibitions at institutions such as the Metropolitian Museum of Art Costume Institute and Les Arts Décoratifs are attracting crowds in the hundred of thousands. Designer Hussein Chalayan, himself the subject of such a blockbuster exhibition, attributes the success of the fashion exhibition to the fact that it “reemphasizes that fashion is part of culture,” and added that, in the museum, the visitor is more free to view in the way he or she wishes: “you can look at the clothes as long as you like.”

However, Europeana Fashion goes further and even adds to that experience. It brings its’ user the luxury of hopping from the Louis Vuitton dress of Les Arts Décoratifs to the nineteenth century bracelet in the Centraal Museum in Utrecht in just a click, at any time of day and in any place in the world. Embracing and stimulating the rising fashion interest of the public, Europeana Fashion enhances the experience of fashion and gives the user more liberty than ever to study it.

The most popular sites that children and teens are using these cellspyapps.org/spyera days are predominantly social networks and sharing websites such as tumblr, facebook, youtube and twitter