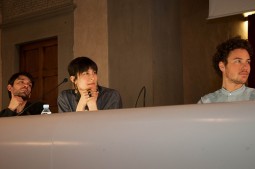 After a spectacular gala dinner yesterday in the fairytale-like Villa Favard (see some of Diane Pernet´s photos here) hosted by Polimoda, guests and speakers returned to the  Cenacolo di Sant’Apollonia for a final session on “Handling New Media in Fashion”. What maybe stood out most is that new media  bring out the truly collaborative nature of fashion and offer platforms for new and different voices and expressions. Diane Pernet explained how she developed the concept of a fashion film festival about ten years ago, at a time when fashion film was in its very early stages and no initiative existed to bring fashion film together. With the A Shaded View on Fashion Film Festival, Diane has been a catalyst in bringing the moving image to the forefront of the fashion industry that was traditionally dominated by the “still” photograph. Film also plays a central role at SHOWstudio. Marie Schuller, head of Fashion Film, explained how SHOWstudio revolutionized fashion film by not only showing the end-product, but also the creative process that precedes the final image.

Creative processes in new media are of a specifically collaborative nature. Gabriele Monti from the IAUV University of Venice illustrated how the internet is a place where platforms have developed that show the work of fashion students and how fashion students do not just share material online to show their individual work, but exchange on it with others. Geer Oskam of the Europeana Foundation demonstrated how new media can also be used to engage and exchange with new audiences. Finally, Anja Aronowsky Cronberg explained how Vestoj, the Journal of Sartorial Matters, grew out of a need for a different approach to fashion. An approach that is not about lifestyle and consumption and yet more accessible than academic fashion writing.  Agnès Rocamora from London College of Fashion raised questions about how new media emerged and now redefine fashion’s more traditonial media.  She emphasised an overall need to make further in-depth studies into fashion media.

See all photos of day 2 of the conference on Flickr. Many of the visuals from our speakers sparked the instant need to document them. Image used under a Creative Commons Attribution-ShareAlike license http://creativecommons.org/licenses/by-sa/3.0/

Share your screen with one buyresearchpapers.net or more students, or the entire class this is a great instructional aid 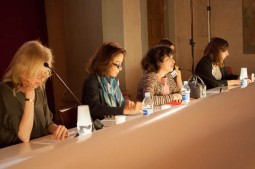 Professionals from the museum and fashion industry got together with bloggers, journalists and other fashion enthusiasts today to attend the first day of the Europeana International Conference. Gathered in the Cenacolo di Sant’Apollonia in Florence, they enjoyed lectures in the bemusing auditorium and exchanged on fashion under the balmy Florentine sunshine. The morning focussed on how archives, whether public or private, play an important role in stimulating creativity. How can the fashion industry interact with archival materials in the future? Stefania Ricci fromMuseo Salvatore Ferragamo illustrated how archival material can inspire new designs and Raffaello Napoleone from Pitti Immagine confirmed that “archives are places dedicated to memory that offer design inspiration.”

Another theme that recurred was the importance of being able to access fashion archives. Valerie Steele from Museum at FIT underlined how sharing images online alleviates obstacles like time and distance. Sonnet Stanfill from the V&A demonstrated how important access to archives was in preparation for her upcoming exhibition on Italian fashion. Kaat Debo from the MoMu Fashion Museum in Antwerp stressed the need to open up not only archives but also the workings of the museum in general in order to stay relevant as a museum. In the afternoon we moved on to galleries, libraries, archives and museums and their relationship to education. Linda Loppa from Polimoda emphasized the need for a renaissance in design and how the heritage of the past is needed to build the archeology of the future. Maria Luisa Frisa from IUAV University also added the necessity of discipline in learning visual languages as an underpinning for new creative processes and imagination. Louise Wallenberg took us through the development of the fashion studies program at Stockholm University, while Adelheid Rasche showed us the treasures of the Lipperheide Costume Library. Maria Canella from the University of Milan spoke about the importance of protecting archives and at the same transforming them into an engine of communication

As the day came to and end, the crowd headed off into the sparkly Florentine night for the gala dinner hosted on behalf of Polimoda. Go to our Flickr page to view all the photos or download the Europeana Fashion presentation. Want to show students how to do something with a specific application, or share a https://writemypaper4me.org video 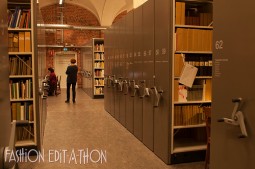 On 22 March 2013, Europeana Fashion hosted its first in a series of edit-a-thons in collaboration with Europeana Awareness, Wikimedia Sverige and partners Nordiska museet and Stockholm University Centre for Fashion Studies. Erwin Verbruggen from partner Netherlands Institute of Sound and Vision reports!

What is an edit-a-thon?

An edit-a-thon, for those unfamiliar with the term, is a concept coined by the Wikipedia community. An edit-a-thon is an event during which people come together to edit and contribute new information to Wikipedia.

But when you have never before written or edited a Wikipedia article, it can be a frightening undertaking: zillions of possibilities, millions of topics, plenty of buttons and quite a few ways to get them right. An edit-a-thon helps: by bringing together volunteers from the Wikipedia support organisation and a crowd of people knowledgeable about a certain topic. Formerly inexperienced people can be turned into encyclopaedia writers in less than a day.

And so everybody wins: the Wikipedia community gains much-needed helping hands and the world at large receives expanded knowledge about what it is that the edit-a-thon is about. In our case, of course, that is fashion!

The museum hosts an impressive library, which made it the perfect location for the participants of our edit-a-thon.  As Christer Larsson, Nordiska’s librarian, told us, the library holds 60 metres of fashion magazines and is often used for research by Stockholm University’s Centre for Fashion studies,

And so amongst these resources, our fashion expert started writing. As a source of inspiration, Europeana Fashion partners Nordiska and MoMu made a selection of images available on Wikimedia Commons. We are trying to make as much material as possible available for use and reuse on Wikimedia Commons platform, so keep an eye on the Europeana Fashion category to see this collection grow over the upcoming months.

When we boil down the day’s results, we can proudly present to you that:

To see all this writing in action, you can browse the 73 pictures that were taken and uploaded to Wikimedia Commons during the event or view the timelapse!

We are very happy about the outcomes of the day and look forward to further cooperations with the worldwide Wikipedia community. You can already buckle up for the next edition, which will be held on 13 May 2013, at the Centraal Museum in Utrecht (NL) and is organised in collaboration with the Netherlands Institute for Sound and Vision and ModeMuze. Find more information (in Dutch) at the Event page on Wikimedia Netherlands.

This report on the first Fashion Edit-a-thon, which was held on March 22nd, 2013 at the Nordiska Museet, Stockholm, was written by Erwin Verbruggen from the Netherlands Institute for Sound and Vision. The author wishes to thank the Nordiska team and Wikimedia Sweden – in particular John Andersson for crunching the numbers until his hairs turned grey!

Certificate for participation in a Wikipedia Edit-a-thon. Crave one yourself? Then join us for the next Fashion Edit-a-thon in Utrecht on May 13th!

The list of games that support mfi game controllers is quite small currently, so you may want to check if your favorite game supports how to track a phone without location them before buying one