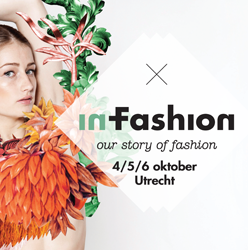 On October 4, 5 and 6 fashion festival In-Fashion will take place for the second time in the city centre of Utrecht. In-fashion wants to inspire people to discover the world of fashion in a new way by focusing on storytelling. The programme is filled with lectures, music, performances, film, an exhibition and workshops.

In-Fashion will have a festive take-off with a performance by singer-songwriter Lilian Hak, followed by an extensive programme on Saturday and Sunday. Fashion experts and designers like Bas Kosters and Puck&Hans will tell their personal stories and will discuss themes as innovation, craftsmanship and breaking boundaries in the Speakers Corner. In the exhibition ‘Meet me in my Room’ over 15 fashion designers will expose their work in the rooms of a design hotel.

This year, In-Fashion has a stronger collaboration with fashion entrepreneurs in the city centre and the festival expands to more than 13 locations. Fashion stores will become part of the programme and offer special discounts to all visitors of In-Fashion.

In-Fashion is an initiative of Iris Loos, Ingrid Dinnissen and Cindy Dekkers (Designercafe) in collaboration with the Utrecht school of the arts, Centraal Museum and Centrum management Utrecht.

Order your tickets for the festival here. 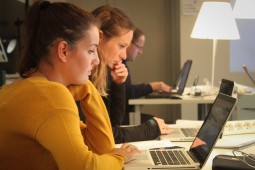 On a humid September day, fashion enthousiasts, Wikipedians, archivists and students met at MoMu – Fashion Museum Province of Antwerp in Belgium to improve and expand fashion knowledge on Wikipedia.

The event was co-organised by Europeana Fashion partner MoMu and Wikimedia Netherlands. It marks the third Europeana Fashion edit-a-thon and the first one with an actual theme, which was Belgian fashion. After a meet-and-greet breakfast, the morning started with a brief introduction on MoMu’s collections and how it contributes to Europeana Fashion by Gabriëlle de Pooter. Romaine from Wikimedia Belgium then gave a detailed overview of the world of Wikipedia. After these introductions, it was time to write!

The Flemish Fashion Institute (FFI) and researcher Sarah Heynssens had prepared a helpful list of Belgian Fashion topics that deserve more attention on the Dutch-language Wikipedia. The list included names of Belgian fashion designers, brands, organizations, and jewelers. It was extensive. With more names than I expected and with names that I had certainly never seen before. But others knew right away which articles they wanted to edit or create and the MoMu library was more than prepared. When I asked the librarian for a specific old copy of Elle Magazine I didn’t think there was any possibility of her having it. Five minutes later she returned from the library, copy in hand, so fresh and crisp it appeared as if it had just come off the newsstand.

The extensiveness of the list and available resources served as a testament to MoMu’s, Antwerp’s and Belgium’s fashion history. This wealth of knowledge and depth of expertise became more apparent during the tour of the school’s Happy Birthday Dear Academie-50 years Fashion Department” exhibition. A perk of participating in the edit-a-thon.

All graduates' names from the past 50 years. Photo: Christin and Monica Ho, Creative Commons Attribution Share-Alike 3.0

The exhibition begins with a timeline that lines the building’s main stairwell. Visitors can see the school’s incredible development and progression in the timeline as they make their way up the stairs; from Mary Prijot’s classical, subdued approach and the subsequent silhouettes students created to Linda Loppa encouraging for students to be individualistic and avant-garde. These changes become even more apparent inside the exhibition itself, which showcases pieces from decades of graduates. The works range from subdued colors and silhouette to avant-garde and aggressive, showcasing the diversity and individualism of the students as well as the influence their professors had on them. However, the underlying themes are never lost and the collections are harmonious and inspiring.

A large section is dedicated to the “Antwerp 6”. For those who do not know, the Antwerp 6 (+1, in fact) were a group of students from 1980-1982 who chose to rebel against the pedagogical vision of Mary Prijot. The 6 +1 (Ann Demeulemeester, Dries Van Noten, Walter Van Beirendonck, Marina Yee, Dirk Van Saene, Dirk Bikkembergs—and Martin Margiela) were inspired by the punk scene and inspired one another to push themselves and fashion boundaries. After much struggle due to the fact that they were from Antwerp, not exactly a fashion Mecca at that time, the 6 +1 went on to great international success and are still regarded as the individuals who put Antwerp on the fashion map.

After the tour it was up to us to put Belgian fashion on the Wiki map. Inspired by the tour we went back to work finishing up our articles, editing, and uploading. With the wealth of information available in the library we could have stayed all night but alas time was up. Many participants noted that they wanted to add more to their articles and planned on finishing up at home or the next day. Sometimes things take time.

The Belgian fashion scene was not built in one day. It took years of hard work, devotion, pride and rule breaking for Antwerp to make a name for itself in the fashion world. And today it stands near the top. While not all topics were covered during the edit-a-thon (the list  was four pages long), Europeana Fashion successfully made a dent thanks to MoMu’s incredible library, the patient tutelage of our on-hand Wikipedia experts, and the hard work of all the volunteers. 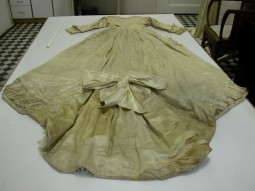 Museum of Applied Art, Belgrade takes us to the textile conservation workshop, showing us the conservation treatment of a wedding dress, worn in Belgrade, in 1878, by Draga Kandić at her wedding to Ljubomir Kovačević, historian and politician.

The museum bought the dress in 1964 from the couple’s daughter Milica Rakić, wife of the poet and diplomat Milan Rakić. The princess dress was worn with a busk and reflects the style of the day. It has no horizontal waist seam, but uses vertical tucks to fit closely to the upper part of body.

The conservation process consisted of taking the dress apart, mechanical cleaning, washing, drying, conservation of damaged areas, sewing the dress back to its original form and its preparation for the exhibition. The conservation was conducted by the museum conservator Marija Labudović, with the professional and practical help provided by the Ethnografic Museum, Belgrade and The Central Institute for Conservation, Belgrade.

The wedding dress was on display at the museum exhibition “Wedding Dresses in Serbia in the Second Half of the 19th and at the Beginning of the 20th Centuries, from the Collection of the Museum of Applied Art”, curated by Draginja Maskareli, between September 22 and December 31, 2011.

Find out more about bridal costume from the Museum of Applied Art and the Peloponnesian Folklore Foundation  on our Tumblr.

Conservation of the damaged areas. © Museum of Applied Art, Belgrade

Sewing the dress back to its original form. © Museum of Applied Art, Belgrade

The wedding dress on display after conservation. Photo: Veselin Milunovic

Detail of the dress. © Museum of Applied Art, Belgrade

Last year we essay helper online eduessayhelper.org learned about netsupport school, and discovered that there was in fact an affordable application that could deliver this functionality, and much more 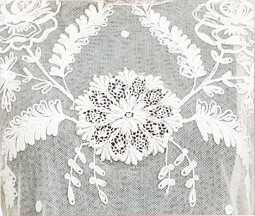 This month our Tumblr is co-curated by our partners Museum of Applied Art Belgrade and the Peloponnesian Folklore Foundation. Delving into their collections, their curation evolves around one of the most significant rituals in life: marriage, and the clothes and accessoires that give expression to it.

Wedding photo of Danica Paligorić and Nikola Jorgovanović, an infantry major, with a groomsman; The Kingdom of Serbia, Niš, 1911; courtesy of Čedomir and Rastko Vasić from Belgrade. Wedding dress of Danica Paligorić kept in the collection of the Museum of Applied Art in Belgrade.

Marriage is an important fact in human life and accompanied by many rituals, most of which have a religious significance and cultural expectations, aiming to ensure the happiness of the newlyweds. Generally, marriage is preceded by the engagement period, which is dedicated to the promise of a happy marriage. Wedding ceremonies used to take  place on Sunday (until late 1980s where the wedding day often became Saturday), but preparations begin several months, if not years, before.

Especially, the wedding outfit has special significance for the bride and it is probably the most important garment a woman could ever wear. As it is chosen for such an important occasion it reflects the bride’s family wealth and social status, the change of technology, the shifts in the economy and also the fashion of the moment. It is usually made of delicate materials, finer fabrics, lace, jewels and has more exquisite workmanship than can be found in other dresses.

The Museum of Applied Art Belgrade and the Peloponnesian Folklore Foundation‘s bridal costume collections reflect a wide social range, from high society wedding gowns to simpler village wedding outfits. Most of them are donation from the wearer or their relatives whom often provide information about the wearer, whom she married, the date and the place of the marriage, the provenance, the maker. Original photographs were also given that show how the dresses were worn and accesorised. Although a lot of women chose to preserve their wedding dresses others altered them to evening style gowns.

Visit our Tumblr to discover these exquisite collections.