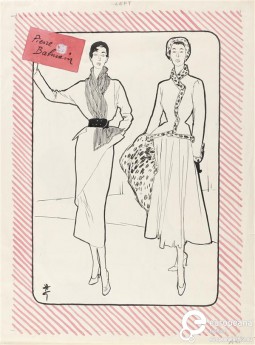 Pierre Balmain was born in 1914 in St. Jean de Maurienne. His father owned a wholesale drapery business and his mother worked at a boutique.

After a childhood spent playing with fabrics in the shop where his mother used to work, Balmain started to study architecture at the Ecole des Beaux Arts in Paris, but did not complete his studies. He used his spare time designing dresses and when decided to present them to somebody, he turned out a trial at Molyneux’s, where he worked for five years, from 1934 to 1939.

After compulsory military service, the designer joined Lucien Lelong and worked for him during the German occupation of Paris. The Maison Lelong launched the trend of the long bell-shaped skirts with small waists, a line which later became popular as New Look. In 1945 he opened his own house and in 1947 he launched a perfume and gave it the name of his telephone number Elysees 64-83.

Later in 1951 he opened branches in the USA and designed many sportswear collections for the ready-to-wear market, becoming famous for his ability to make simple, tailored suits as well as grand evening gowns, in the same slender and elegant lines. He introduced the “bouffant” skirt, which remained high fashion for evening wear during the 50′s, in ensemble with the boned strapless top.

In addition to his couture work, Pierre Balmain’s designs were greatly in demand in Hollywood. He received a nomination at the Tony Awards as better costume designer and won the Drama Desk Award for best costumes in Happy New Year, in 1980. Between 1951 and 1972, he designed costumes for 16 films, dressing stars as Vivien Leigh and Mae West, also for the off-screen events. He also designed for French films, including “God Created Woman” which introduced Brigitte Bardot to the great screen.

He died in Paris in 1982, leaving his house led by Erik Mortensen, a Danish designer , who had been Balmain’s right hand man. 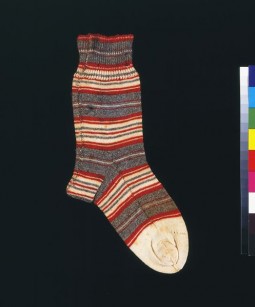 Winter is coming and temperature lowers… so why don’t you browse Europeana Fashion’s collections of warm socks?

Socks are among the oldest item of clothing ever worn. The words comes from the Old English “socc”, which means “light slipper”. It evolved from the Latin “soccus” that indicates a “light, low-heeled shoe” which was worn by Roman comic actor, deriving from the Ancient Greek “sykchos”.

Those worn by Ancient Greeks in the 8th century BC were made from matted animal hair for warmth, but since then the socks evolved in form and uses. Romans, in fact, used to wrap their feet with leather and other fabrics instead. These clothes also got different symbolic meanings. By the 5th century AD, socks called “puttees” were worn in Europe to symbolize purity, and by 1000 AD, for the high value of this item of clothing, they became a symbol of wealth among the nobility. However, the invention of knitting machine in 1589 revolutionized the production of socks, which could be knitted with the machine far more fast than by hand.

Europeana Fashion collects in its archive a wide variety of socks, from all over the world. The collection includes not only the tabi socks which inspired the famous Maison Martin Margiela “Tabi Shoes”, but also many traditional socks from different times and countries. In addition, in the collections there are some outlandish examples of socks designed by many contemporary designers, like Berhnard Willhelm. 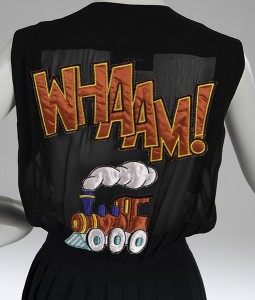 Until April 3rd 2016, the Mint Museum in North Carolina, USA, hosts the first American retrospective on the work of Franco Moschino, the designer that during the 80s mocked the fashion system with his irreverent designs.

“VIVA MOSCHINO!” celebrates the legacy of the Italian designer Franco Moschino, showing “the range of sartorial achievement and social commentary in Moschino’s oeuvre”, which continues to inspire contemporary fashion and relieves in the creations of Jeremy Scott, the latest Creative Director of Moschino.

After working as an illustrator for Gianni Versace and alongside Karl Lagerfeld at Cadette, the designer launched in 1983 “Moschino Couture!” line. His style was ironic, and along with surrealistic elements, the designer was used to decorate his garments with humorous statements like “waste your money”. His shows, which he eventually replaced with private presentations, were memorably defined outrageous and the designer used to leave tomatoes and flowers on editors’ chairs for them to express their displeasure or happiness with his collection.

The exhibition, largely drawn from two Chicago-area private collections, institutional loans and the Mint’s own collection, features many of the designer’s iconic pieces such as “BE SIMPLE!” little black dress, “Smiley” and “Domani è un Altro Giorno” jackets, along with different works from his Cartoon Couture Collection. 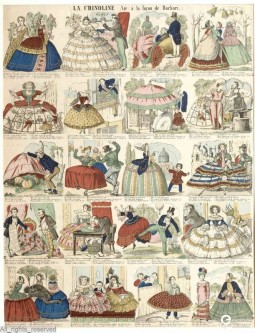 The steel-hooped cage crinolines, first patented in April 1856 by R.C. Milliet in Paris, and by their agent in Britain a few months later, became extremely popular across the Western world, where they were worn by women of every social standing and class.

Originally the crinoline, consisting of a stiff fabric made of horsehair and cotton or linen, was used to make underskirts and as a dress lining. The stiffened or structured petticoat was designed to hold out the woman’s skirt and by the 1850s, the ladies wore it up in order the widen skirts to achieve the illusion of a tiny waist.

Crinoline, 'A Favorite Of The Empress', spring steel frame covered with red wool and linen, probably made in Great Britain, 1860-1865. Collection Victoria and Albert Museum, CC-BY-SA.

By then, the term crinoline was more usually applied to the fashionable silhouette provided by horsehair petticoats, and to the hoop skirts that replaced them. In form and function these hoop skirts enabled skirts to spread even wider and more fully.

At its widest point, the crinolines could reach a circumference of up to six yards. Their features, and their width, made the crinolines dangerous if not worn without due care and this widespread media scrutiny and criticism. Many caricatures and illustrations refigured fashionable ladies wearing impossible and exaggerated version of the cage in ridiculous scenes, but this however reflected a true and less funny reality. Thousands of women died in the middle 19th century as a result of their hooped skirts catching. In addition to fire, their hazards included the hoops being caught in machinery, carriage wheels, gusts of wind, or other obstacles.

By the late 1860s, crinolines were beginning to reduce in size and, in the early 1870s, they were largely replaced by the smaller crinolettes and the bustle. 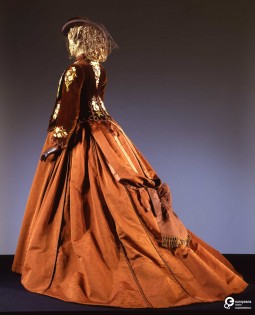 Find in Europeana Fashion collection some of the gowns and costumes worn in the greatest movies of film history!

Last week, Europeana Fashion posted on its social media a picture of the stage costume for the main character of Pier Paolo Pasolini’s Medea, portrayed by the opera singer Maria Callas.

Designed by costume designer Piero Tosi, the costume is composed of a tunic in pleated cloth, a richly decorated scapular and a veil in gauze. In the movie it was worn by the main character, Medea, the Greek mythological figure known for her terrible vengeance.

Piero Tosi, born in 1927, designed costumes for many of the greatest Italian movies. In addition to those for “Medea”, in fact, Tosi designed the wonderful gowns worn by the Italian nobles of Visconti’s “The Leopard”, the delicious outfits for Romy Schneider in Visconti’s “Ludwig”, and those for Liliana Cavani’s film “Beyond Good and Evil”, among others. 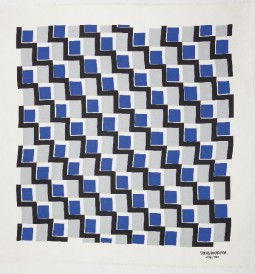 Sonia Delaunay Terk, the first avant-garde representative in fashion of the 900s, was born in Ukraine in 1885. After having studied art in Saint Petersburg, she moved to Paris in 1906 and started to paint under the influence of the works of Van Gogh and Gauguin.

In 1910 she married the painter Robert Delaunay and co-funded with him the Orphism art movement. The two artists henceforth worked in close association doing experiments with colors in art and design. Their research around shades of colors were inspired by the optical effect of simultaneous contrast, which occurs when one design, when placed next to another, affects both.

The first simultaneous design opera is dated 1911 and consists in a patchwork quilt made by multicolored geometrical cuts of fabric sewn together. Since then, Sonia Delaunay started the production of sartorial works in simultaneous style and worked in the field of fashion, connecting her practice to the painting. The Simultaneous dresses she designed focuse on color’s impact and have simple shapes to underline the geometrical patterns. Her opera has influenced fashion trends during 20s and 30s and the style of the 60s.

In 1917 she designed the costumes for the Cleopatra ballet, directed by Sergei Diaghilev, who helped her to open a string of shops in Bilbao, Madrid and Barcelona, selling clothing, fabrics and homeware. Later in 1927, during a lecture at the Sorbonne titled “The Influence of Painting on the Art of Clothes”, she explored the rhythmic relationship between colours in her fabrications and the reasons behind the move towards ready-to-wear during a time where couture was the norm.

She died in Paris in 1979, after she received the Légion d’Honneur and painted the poster for the International Women’s Year of UNESCO, both in 1975. She also took part in the Paris-Moscow Exhibition at the Centre Pompidou in 1979, to which she had donated her entire graphic work in 1976. 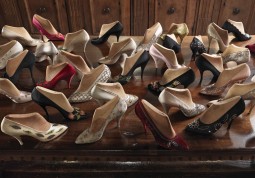 To present the exhibition about the history of its own seat, Palazzo Spini Feroni, Museo Salvatore Ferragamo curates Europeana Fashion Tumblr during the month of November!

Image of the exhibition A Palace and the City.

Celebrating the 150 years since Florence was named capital of the Kingdom of Italy and Palazzo Spini Feroni was chosen to be the city hall in 1865, the exhibition will include prestigious works of art and documents from museums and private collections around the world and will tell the intricate stories behind the palace and its residents.

1950s evening shoes photographed in one of the rooms of the Palazzo. Photo Arrigo Coppitz. Florence, Museo Salvatore Ferragamo, all rights reserved.

While the set showcases how the building’s historical and architectural value are extremely important for the city of Florence, it also brings the past into the present and highlights the close connection between a magnificent example of Medieval architecture as Palazzo Spini Feroni and the city of Florence, reflecting Italian lifestyle, creativity and elegance.

Curated by Stefania Ricci and Riccardo Spinelli, and organized in captivating displays created by set designer Maurizio Balò, the exhibition will run from 8 May to 3 April 2016. 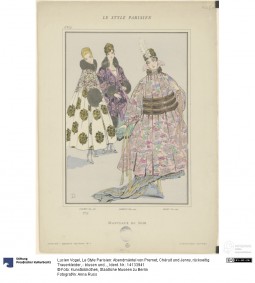 Whether depicting the best vogue for evening parties or the latest trends to wear while practicing a winter sport, historical publications are a great source of inspiration. This month, Europeana Fashion selects a few of the best plates from the 19th and 20th century collected in its archive to let you welcome November at its best.

The Kunstbibliothek, Staatliche Museen zu Berlin offers a wide selection of this plates and prints. Witnesses of fashion passing by, the publications collect in elegant black and white or coloured plates, not only garments but also the best hairstyles and accessories to sport at parties.

In addition to those of other beautiful models, in the publications are also featured amazing illustrations of the Parisian styles of the time, including the creations of couturiers like Lanvin, Worth and Paquin. Browse Europeana Fashion to find more fashionable suggestions to enjoy this November!