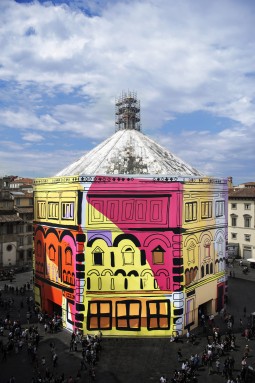 Earlier this month, Pucci and Pitti Immagine, both partners in the Europeana Fashion project, collaborated on a project during Pitti Immagine Uomo. Titled “Monumental Pucci”, the Baptistery of Piazza San Giovanni was covered with the beautiful colours and graphics of Pucci’s iconic Battistero sketch.

This unique project, realized by Pitti Immagine for Emilio Pucci, “dressed” the Baptistery of Piazza San Giovanni with the iconic Battistero sketch from the Italian fashion house, covering the entire building with its beautiful colours and graphics.

Designed by the Marquise Emilio Pucci in 1957, the print interprets an aerial view of Piazza San Giovanni, in the brilliant colours of Mediterranean landscapes: vibrant lemon yellow, orange, fuchsia and the emblematic Emilio pink.

The Apse side of the Baptistery was clad in the original Battistero scarf, reproduced and framed on large scale in its entirety, while the remaining seven sides of the octagonal building was covered in almost 2.000 square-meters of canvas, printed in a life-sized rendering of the Emilio Pucci Battistero print, faithfully following the building’s contours.

The project was set up in the light of “Firenze  |  Hometown  of  Fashion”, a  special  programme  of  events  celebrating  the  60th  anniversary  of  the Centre of Florence for Italian fashion. The events were held 17th – 20th June in Florence in conjunction with the City of Florence and with the extraordinary contribution of the Ministry for Economic Development and the ITA – Italian Trade Agency.

Discover the iconic Battistero sketch in Europeana Fashion.Maybe https://trymobilespy.com/ apple is going to introduce their own controller, or several controllers, when they introduce the rumored a7 powered apple tv next year 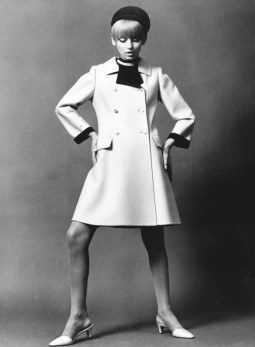 The Netherlands Institute for Sound and Vision (S&V)  is one of the largest audio-visual archives in Europe. The collection totals over 800.000 hours of television, radio, music and film and continues to grow every day. For the Europeana Fashion Tumblr, S&V curated fashion newsreels from the 1920s until the 1970s.

The newsreels come from S&V’s Polygoon collection. Founded in 1919, Polygoon produced bi-weekly and later on, weekly newsreels to be shown in Dutch cinemas. The emphasis in these newsreels was always on objectivity and reliability of the news, but at the same time Polygoon was careful not to alienate the cinema going audience. Therefore, Polygoon tried to focus on subjects that yielded attractive images and  that were not too difficult to understand.

Cameramen employed by Polygoon had to fill their reels, no matter what. This led to a very varied collection of newsreels with more important and serious news events, but also reels showing common everyday life. At its glory days after World War II, Polygoon newsreels were shown in more then 400 cinemas in the Netherlands, but the introduction of television in the fifties led to its decline.

The news programs on television were much more up to date and topical then Polygoon and in 1989 Polygoon finally ended its activities leaving an enormous archive of material; the pre-war period alone covers over 191 kilometers of film.

S&V has made part of the Polygoon archive available through their Youtube channel and through portals like www.openimages.eu. For the Europeana Fashion Tumblr,  S&V curated a collection of fashion related newsreels that show what fashionable men and women were wearing in the 20th century.

The curation covers fashion from the 1920s until the 1970s and explores a variety of subjects and designers. Dutch designers like Frank Govers and Dick Holthaus present their collections in their own unique ways. In Paris, French designers like Pierre Cardin and Marc Bohan (Christian Dior) show their respective collections on the runway. Mary Quant and her revolutionary London fashion opposed Parisian fashion rules  and German designers predicted what we would be wearing in the year 2000.

See the curation on our Tumblr. 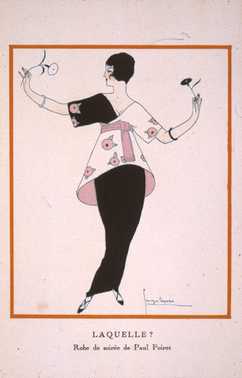 For the past centuries, fashion illustration has been the major source for fashion information. Before photography, fashion was documented through engravings, paintings and drawings that were eagerly sought after world over. Fashion illustration offers a unique visual account of the history of fashion.

During the 1500s and 1600s, two centuries of exploration and discovery, there was a strong desire to know about the costume of other nations. Costume books with engravings, but also painting became important sources of information. By the end of the 1600s it was even in fashion to collect fashion engravings! Around the same period, fashion for the first time became a topic in periodicals and in the 1700s pocket books with small and uncoloured fashion illustrations enjoyed a wide circulation. By the end of the 18th century, the first fashion plates appeared in periodicals dedicated to fashion only.

The 1800s were the heyday of the fashion plate and saw the emergence of a large number of fashion magazines. There were even lower priced black-and-white and more expensive hand-coloured versions of the same magazine. Another development in fashion illustration were plates that not just showed the clothes, but depictions of women wearing them in social contexts, illustrating the appropriate circumstances for the clothes to be worn. The late 1800s saw the beginnings of experimentation with fashion photography, but even then magazines copied photographs through engravings.

In the early 1900s, fashion photography became a more dominant medium. The large circulation of fashion magazines had led to a decline in the artistic quality of fashion plates. It was Paul Poiret who reinvented the fashion plate by commissioning artists to depict his designs. From the 1920s onwards, fashion illustrations were often featured on magazine covers. They did not necessarily reflect the content of the magazine, but were seen as work of arts by themselves. Fashion had become art.

After WWII, the fashion plate still blossomed in fashion magazines, but from the 1960s onwards it was replaced by photography as the main conveyer of fashion. Fashion illustration largely disappeared from magazines, although there was a revival in the late 1980s, reminiscent of the style of the 1920s.

Nevertheless, up until today fashion illustration is considered an art form and, thanks to the digital revolution, is experiencing a renaissance. The Internet is an excellent platform for fashion illustration that offers fresh and unique perspectives in a fashion world that is saturated with photography.

You can find many fashion plates in Europeana Fashion by searching for “sketch”, “drawing” and “plate”.