The exhibition, which will be on show until the 23rd October, questions the value of a fashion collection and the parameters which defines it.

In a fashion museum’s collection the most valuable items are not always the most expensive or decorated. Many factors play a role in defining the value of a dress, may they be the name of its creator, the condition in which they were created, the function they covered, or the name of their wearer.

The exhibition “Anatomy of a Collection” focuses on this last aspect, drawing from Palais Galliera collection for a hundred garments and accessories, which cover four century of fashion and costume history. The pieces on show include Napoleon’s waistcoat, a nurse’s suit, a dress belonging to George Sand, Sarah Bernhardt’s cape, Audrey Hepburn’s outfit, Elsa Schiaparelli’s overcoat, a dress worn by the Duchess of Windsor, Tilda Swinton’s pyjama suit designed by Haider Ackermann.

The importance of these pieces is bound to that of the person they were intended for or to the one that wore them. Made by more luxurious or less precious materials, they reflect the cultural significance of their wearer and therefore acquire a different worth inside a museum’s collection and a different light under the eyes of the one who beholds them. 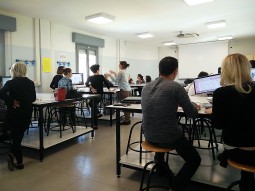 On the 23rd of May, a new edition of our Fashion Edit-a-thons, the event series dedicated to the WikiGLAM collaboration, organized by Europeana Fashion in collaboration with Wikimedia Italia, has been held in Rimini, at Valgimigli’s complex, branch of Degree Courses in Fashion Culture of the University of Bologna, supported by ZoneModa project.

The event was reserved to the students of the two Degree Courses in Fashion.
The day started with the welcoming speech from Ms. Daniela Calanca, Professor of contemporary history and Mr. Marco Rufino, President of Europeana Fashion International Association, followed by a presentation of Europeana Fashion and its portal, by Erica Marigliani and by a full explanation of the “instructions for use” for the publishing of new articles on Wikipedia, held by Virginia Gentilini, member of Wikimedia Italia.

In the afternoon, the participants set up the online publication of five new fashion entries in Wikipedia: “sartoria”, “Renee Gruau”, “Baldinini”, “swimwear” and “crinoline”. The sources for the articles have been gathered both online and in books provided by the University library.
Two members of Wikimedia Italia supported the students in solving operative and methodological issues related to the editing of new entries on Wikipedia.

A selection of images were uploaded in Wikimedia Commons to give the participants materials for the illustration of the new articles. Great part of the images were taken from the repository of Europeana Fashion and the remaining were provided by Baldinini, a well known fashion firm based near Rimini. All the images have been released under Creative Commons licence.

Wikimedia Italia considers the collaboration with universities, museums, archives and libraries as an important chance to spread its working method and to start a dialogue with the institutions which use to “keep” and develop the culture. Wikimedia Italia believes that there is a small distance between them and the education system and they are sure they should start to collaborate with each other to take advantage of the digital divulgation capacity, today possible through the web. In addition, with this kind of events Wikimedia is trying to bring into Wikipedia new content, which has not a widespread attention as others.

Twelve students have actively parteicipated to the edit-a-thon and 5 new articles have been published on Wikipedia. Proud of the results and satisfied with the outcomes of the day, the University of Bologna has announced its interest in organizing a follow-up event. Stay tuned for more news on our forthcoming edit-a-thons. 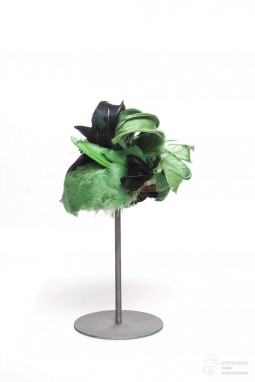 Known now primarily as the traditional cooks’ hat, the toque is a type of headwear which was in use from the 13th to the 16th century in Europe, distinguishable for the lack of brims.

The name of this kind of hat may have two different origins. It is the Breton for “hat” and the Arabic for “round”, a term which was known in English since 1505. It probably came through the Medieval French “toque”, probably derived from the Spanish “toca”, the long wig worn by the Spanish and French nobles since the 15th century.

However, it indicates a particular kind of hat which may vary in decorations and material, while it is characterized by the absence of brims, which made it a popular choice for sports during the 20th century.

While this shape was already known in Europe from the 12th and 13th century, the toque came back to fashion at the end of th 18th century and again in during the Twenties and Thirties, decorated with precious stones or feathers.

Europeana Fashion collects among its items various examples of this particular kind of hat! Follow our social media this week to find the top seven or browse the collection to see them all! 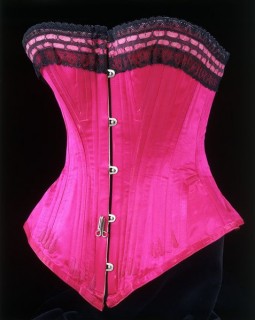 Victoria and Albert Museum’s latest exhibition, which will be on show through the 12​th March 2017, explores the history and the evolution of lingerie.

A kind of garment usually worn under the clothes, lingerie is today a worth element of debate which highlights different topical issues concerning gender, sex and morality. Visiting Victoria and Albert Museum’s latest exhibition “Undressed: A Brief History of Underwear​”, one can immediately understand the close link which bounds fashion to underwear, underwear to the body and the body to fashion.

The Museum displays in the venue more than 200 objects, from the late 18th century to contemporary designers’ creations, to show a chronological evolution of lingerie on a timeline that is not free of flash­backs and flash­forwards.

However, in the exhibition are not only featured extraordinary examples of undergarments worn by extremely customized mannequins, but also the advertisement, packaging and other paraphernalia which accompanied them. Including both menswear and womenswear,the items displayed contribute to tell the history of the evolution of the ideal body and the way it was envisioned by fashion during more than three hundred years’ time. 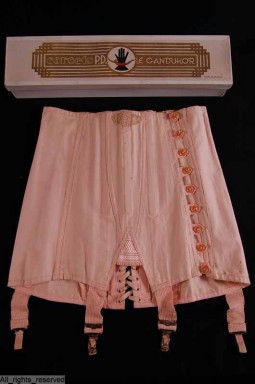 Underwear, originally created for practical purposes, like preserving women’s modesty and for hygiene reasons, evolved lately in structures desinged to change the woman’s silhouette depending on fashion trends across fashion history.

The historical evolution of lingerie reveals a lot about women’s changing role in society: how they perceived themselves and how they were viewed by others. Women have worn rib-crushing corsets, bondaged their chests to get an androgynous silhouette and burned their bras as a statement of liberation.

During the Roman Empire the undergarments were the same for both women and men: a sort of pants, called subligaculum, which women matched with a band of leather around their chest, called the strophium.
Later, in the 13th century, men started to wear linen shorts called braies, while women did not wear knickers until the 19th century. The only kind of underwear used , was a long linen garment called shift, worn under their dress, later tightly wrapped around their chest by corsets made with whalebone, introduced since the 16th century.

Since then, corsets and petticoats haves shaped differently the women’s silhouette until the beginning of 20th century. From the pannier in the 18th century, to the crinolines in the 19th century, the feminine underwear became a real structure under the dress. To shape their body according to the fashion trends, women forced themselves in the most tighter corsets and carried the weight of the ever bigger gowns.
In the 19th century, women begun to wear drawers, while men used to wear a combination of vest and pants in one garment.

At the beginning of the 20th century the corset trend arrived to the extreme point: women used to shape their body with such tight corsets that their waist could measure 10 centimeters in circumference, causing deformations and diseases.
In 1910 knickers e stockings were produced in rayon for the first time and in 1913 Mary Phelps Jacob invented the first bra, made with two handkerchiefs joined by a ribbon. These were probably the first steps toward a modern concept of underwear.

Even if underwear has become a comfortable suit after the fifties, almost invisible under the garments, it has always kept on inspiring fashion trends, as we can see in Jean Paul Gaultier’s creations of 80s. His famous guepiere wore by Madonna has left a mark in contemporary history of costume. 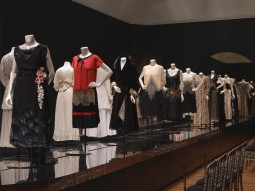 Rijksmuseum is curating Europeana Fashion Tumblr with a selection of pictures and looks from their latest exhibition “Catwalk Fashion at the Rijksmuseum”, curated by Erwin Olaf, which displays for the first time ever the costume collection of the Museum.

Since the 1870s the Rijksmuseum Amsterdam has collected costumes. The fashion collection totals 10,000 items, with men’s, women’s and children’s attire and accessories spanning the period from 1700 until 1960. In addition, the History Department owns the earliest Dutch costumes, worn in the seventeenth century by the Frisian branch of the Nassau family and by the Stadtholder and King William III. Being the oldest costumes collection in the country, acquisitions initially emphasized on the eighteenth and nineteenth centuries, but over time gradually expanded to include the first half of the twentieth century.

All of the garments come from the wardrobes of upper-class Dutch men and women, but they were not necessarily made in the Netherlands. Foreign fashion houses and fabrics from all the leading textile-manufacturing countries around the world are amply represented. Acquisitions for the collection are based on historical significance, such as a post-war dress made of silk RAF pilots maps; design relevance, such as Yves Saint Laurent’s 1965 “Mondrian dress”; and costume-historical importance, such as a silk taffeta cocktail gown by Cristóbal Balenciaga dated 1951-1952. Most items were donated or bequeathed, supplemented with purchases. Because of the frailty of the material these are no permanently on show. The exhibition “Catwalk Fashion at the Rijksmuseum” explores the riches of the collection. The design was done by photographer and artist Erwin Olaf, who also made several works especially for the exhibition, wherein are featured costumes from the collection.

This curation shows a selection of about 25 costumes that are currently on show. Prior to the exhibition all objects were photographed by the museum and ascostumes are 3D objects a single shot will not do them justice, hence a picture of the back and side as well as some details were always taken, showing the garments from other angles or in more detail. Visit every day Europeana Fashion’s Tumblr to find a new picture of this curation! 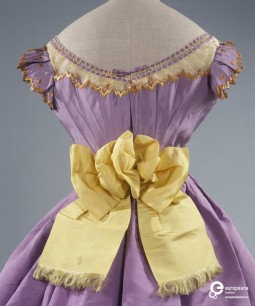 Functional or decorative, bows are a recurrent element in fashion. Among all the ones collected in its digital archive, Europeana Fashion has selected the most interesting and stunning to share them this week on Facebook and Instagram!

The origin of the bow as a decorative element is quite uncertain. It became a fashionable ornament in jewelry-making and goldsmithing during the 17th century, inspired by the ribbons that usually tied the jewels. These ornaments, in gold or silver enamelled with precious stones, were used as pins and applied on row on the corset and were named Sévigné after the woman that made them popular, Madame de Sévigné.

Gold breast or hair ornament, enamelled in blue and white and set with table-cut diamonds in the form of a bow and jabot, made in France, about 1650. Collection Victoria and Albert Museum, CC-BY-SA.

During the 18th century, bows made of silk ribbons became the forefront fashion for trimmings. Large bows were fixed down to the front of stomachers in echelles and they also decorated elbows or were worn around the neck. They trimmed also hats and shoes and other women’s accessories.

Although they are considered an epitome of femininity, they were worn by men too, over richly decorated habit à la française or as elegant bow ties, a new style of neck tie that made its appearance in the beginning of the 19th century, substituting its predecessor, the cravat.